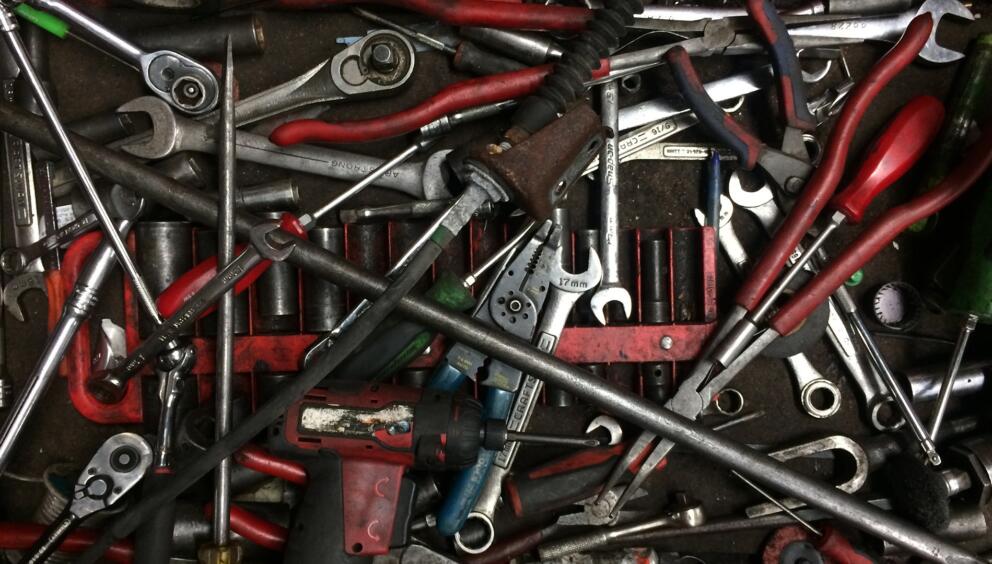 Most things used here are overkill for a simple blog, but it was a great excuse to learn a few new things along the way. After everything is setup I can make most content updates from my laptop, tablet or phone - which is cool.

Shout out to Alfred and the many workflows I use every single day and the snippets are only a system-wide variable away.

Harvest is an awesome app for time tracking that makes your life a lot easier - but I still use Office Time for some of my freelance clients because their info is already in there and I paid for Office Time a long time ago and it's still working fine for me. It's not as robust as Harvest but it does the trick when I'm only one person and billing a small company.

This one is a given, Photoshop, Illustrator, Premiere, After Effects, Media Encoder, etc.

Beginning a project and setting up yet another thing with the same structure as the last project is a huge bummer for me. At Sprokets, we have a pretty cool Yeoman generator to set everything up and get moving quickly.

My favorite text editor as of lately, but Sublime Text is a close second.

iTerm with oh my zsh to me, is a little nicer to use than bash. ZSH has some handy little features. Also, it has so neat themes and plugins.

The task runner of choice. I'm yet to try gulp or anything else, mostly because Grunt can do everything I need it to do right now. As long as it's working and fast enough, it works fine for me.

Using GitHub has been a pretty awesome experience - both for the version control, obviously, and for keeping track of the project along the way. Tower is a GUI app and makes things much easier to use (hotkeys, aw yis).

It makes getting things up and running really quick and it makes writing CMS-friendly HTML pretty easy too. The Sass version is my flavor of choice.

Syntactically Awesome Style Sheets have been my choice in CSS preprocessors for a while. I love the variables, mixins and nested styles. There are a lot of pretty neat things to do with sass and it feels like I'm always learning something new.

I'd love to use a service that deploys from GitHub with manual/auto deployments, but I cant justify spending the monthly subscription when the only sites I'm running are just with me making the updates. It would be nice and its definitely on my radar.. rsync works pretty well for the time being too (and it's free!).

Craft is one of my favorite CMSs right now - I use to be into Wordpress, but it seemed like it had too much stuff I didn't need right out of the box. Craft gives you the bare bones tools to make some pretty cool stuff and lets you make whatever needs to be made.

A craft plug in that if configured and used correctly, lets you control your website SEO in some pretty cool ways.

This one is a no-brainer. Knowing what is happening on your site is insanely useful.

Just as the above lets you know whats going on with your site, the Search Console is your HUD for Google search queries and general SEO-type stuff.

An endless amount of updates

Because the mail never stops. This one isn't a tool or anything cool to implement but it might as well be included on the list. This is one of those things you always have to keep up on because things update so damn much - but its also a great excuse to push up features or changes "since I have to make a new release anyways, why just do that thing right now"? So in a way, it is a great tool.